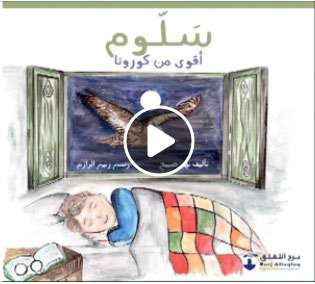 Issuing the paper version of the children’s story

Salloum is stronger than Corona

Last month, Burj Al-Luqluq launched “The Story of Salloum is Stronger than Corona,” which was produced in cooperation with writer Noha Sobeih, and under the supervision and implementation of Burj al-luqluq staff, and funded by play and learn project through UNICEF.

During the story, the writer provides some important information and instructions for children on the tongue of the owl, which would increase their ability to control their feelings and protect themselves and their surroundings from this disease and its effects.

The story speaks in a likable and close manner to children about helping a wise owl for a young child named Salloum to overcome his fear of the Coronavirus, which is what a large number of children around the world suffer, by the way, due to the nature of the conditions that their cities have been living for several months since this pandemic began, and it affected various walks Life, including their schools and normal lives.

After the success of the electronic story, the paper version of the story of Salloum is stronger than Corona is ready, as 600 copies were printed that include Arabic and English and will be distributed to the partner clubs in the project early next month.

The story became popular after it was launched on Burj Al-Luqluq page on Facebook, and children and their families interacted with it, reaching nearly 30,000 views.

Play and Learn project as well published a short video on the occasion of the International Children’s Day, which urged children to follow their dreams and adhere to them after the project funded a youth vocal production with the participation of young Jerusalemite voices to celebrate the anniversary of the Prophet’s birthday.

Finally, the Play and Learn project ended this month with a training workshop for the center’s employees and in cooperation with the Coordinating Committee of the partner institutions with UNICEF, which continued for several meetings on gender-based violence, which came within a series of workshops aimed at raising the capabilities of employees in several different fields.