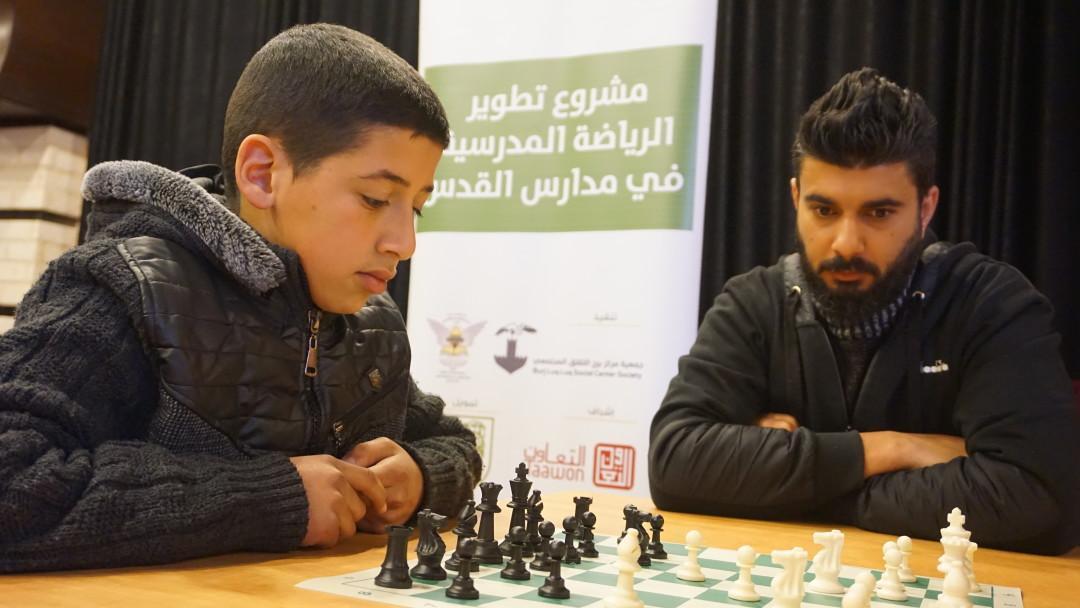 A female chess tournament was held at Ryad Al-Aqsa school in Al-Eizariya.

While the Males Chess tournament was held in t Hosni Al-Ashhab School, for two consecutive days, with the participation of 22 schools, while the arbitration was conducted through a selection of teachers of sports education in schools.

This tournament came within the framework of the policy of working to develop school sports, and an outcome of the great and constructive cooperation between male and female schools in Jerusalem and Burj Al-Laqlaq, with funding from the Arab Fund for Economic and Social Development, and under the supervision of Tawon Foundation.

After fun and exciting rounds between the champions and the heroines of the tournment, the results in the female tournament were recorded as follows: Al-Fataa Al Shamelaa Secondary School won first place, while the second place was in favor of Othman bin Affan Girls’ Primary School, while the third place was achieved by Abu Bakr Al-Seddik Girls Secondary School, As for the male’s tournament, the results were distributed to the first place in favor of Roaa school, and the second position in favor of Omar bin Al-Khattab boys school, while the third place was repeated for the Arab Institute – Doha.

In turn, the teachers thanked  Burj Al-Luqlauq for holding this tournament, which contributes to discovering talents and developing school sports, wishing to repeat it soon, as well as thanking its donners and funder also to brought the participants to it to the level of excellence and creativity in the championship.

Montaser Edkedek, Executive Director of the center, said that this game within the various school sports activities should receive greater attention in Jerusalem schools in general, to develop students ’skills and mental abilities and their high response to the coach and their discipline in training dates, to achieve the great goal between the center and Jerusalem schools to work with one unit Coherent description of a service for sports development in Jerusalem schools, enhancing teachers ‘experiences, and enhancing students’ self-confidence to advance and thrive in the reality of school sports. “

Edkedek expressed his happiness and pride in this distinction and creativity of Jerusalem school students, because this game requires intelligence, patience, wisdom, and planning, congratulating all the members of the teams on the honorable results they achieved in the championship.