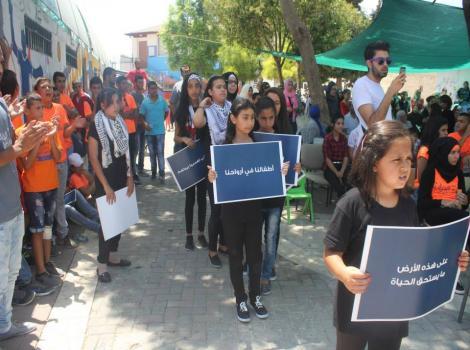 Burj Al-Luqluq Social Center Society celebrated the closing ceremony of its summer camp “Saifna Maqdisi”, on Wednesday 12/08/2015, with the participation of more than 220 Jerusalemite children, in addition to 30 children from Gaza who came with the Educational Guidance Center, in coordination with the Italian Cooperation in Jerusalem. The participation of the children for Gaza was not planned; they were touring around Jerusalem and ended up visiting Burj Al-Luqluq center and participate in this closing ceremony.

Many parents attended the event so as to participate with their children in this pleasant event, in addition to see their artistic, patriotic and singing performances.

Summer camp children started the event with welcoming speech which was followed by speeches from Burj Al-Luqluq Executive Manager, Muntaser Edkaidek, and CISP representative Francesca Bianchini, in which they welcomed the audience and the children participating in the summer camp. Moreover, they thanked the European Union who funded the summer camp which comes within “We’re the Change” project.

Edkaidek added that “Saifna Maqdisi” summer camp aimed to target 150. However, more than 220 came to participate. Francesca added that this project will target more than 450 Jerusalemite children within the summer camp program for 3 years.

At the end of the ceremony, the summer camp leaders Nihad Zughayyar and Ahmad Jaber gave certificates to all summer camp guides and volunteers. This was followed by an exhibition for the work done by the children of the summer camp.