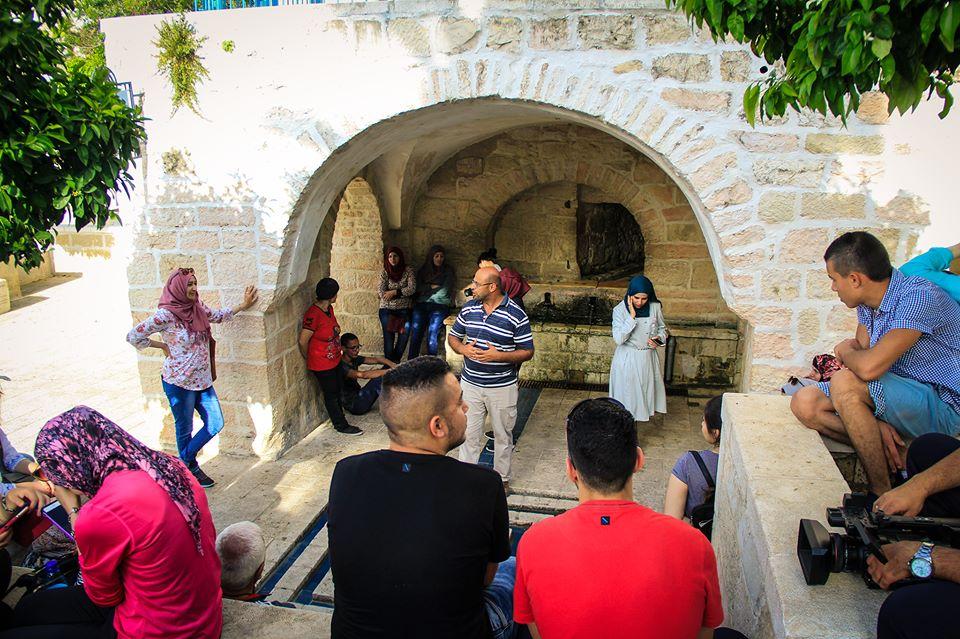 Burj Al-Luqluq Social Center Society organized a tour within the good role model program ‘ The Guards of History’ to the depopulated Village Lifta , in a participation of 50 Jerusalemite youth.

The tour started at 8 am in front of Al-Rashideyah school straight to the village. Mohammad met the participants and welcomed them, he also presented a brief main descriptions of the targeted village.

And then, the participants along with Mohammad went to the eye of Lifta – the Pool, Mohammad explained the importance of the eye, its nature, the surrounding houses, how the citizens were living in the village and determined the location of bathrooms in these houses.

On the Eye, Mohammad showed the participants the most beautiful house in the village ‘ Bader’s house’ which located in the middle of the hill – left side of the Eye. He showed them the beauty of the house which was built by pink stones in addition to its beautiful view in the middle of the hill. Moreover, he indicated that Bader’s Family is living currently in Al-Sheikh Jarah neighborhood and their house is facing restricted procedure for another depopulation process.

After the Eye of Lifta, they went to Lifta’s Mosque, Mohammad narrated the story of the mosque and Shaikh Al-Azhari Mosque who entered the village in the 20th century and aimed to change the traditions of the community and  restoring religions and principles. Then they moved to the village’s winepress in which Mohammad expressed its working methods and importance before the depopulation issue.

Within the tour among the historical houses, Mohammad narrated the historical story about the residents movement towards the new Lifta, Al-Samar land and the French hill. Moreover, he indicates that the population number in that period has reached 4000 residents , and today they are living in Jordan and they own associations in Ramallah and Jerusalem. Finally, they went to the village’s cemetery and the tour was ended with the company of the citizen Mo’amar Abu Al-Leil.

Furthermore, they moved to the historical Jerusalemite Village ‘ Sataf’, they walked among the trees and the nature reaching Al-Bakoura Eye in the middle of the village, they entered the eye and saw its cave and then they moved towards the agricultural land in the village.

Finally, they visited Sataf Eye and made a tour inside this historical eye, went to Al-Hasa Valley to visit Eien Karem village which have many historical churches, Miss Mariam Mosque and the eye, in addition to a dinner meal after the tours.