In light of the deliberate neglect of the occupation, Corona unifies the efforts of Jerusalemites 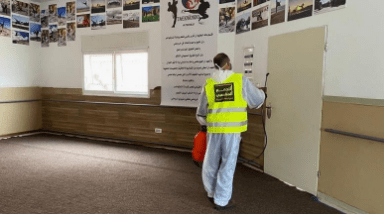 With the arrival of the new CoronaVirus (COVID-19) in occupied Jerusalem, the violations of the Israeli occupation against the city and its people, who have faced since the occupation of its east in 1967, faced a continuous marginalization of the health, education, economy, and other sectors.

And more than 360,000 Jerusalemites live in great concern about what will happen in their city after the suspension of education, commercial activity, the closure of places of worship, and the health system sagging in front of the epidemic.

Maher Deeb, the medical director of Mar Youssef Hospital in Jerusalem, confirms that the numbers of the declared Jerusalemites are not close to the truth, indicating in an interview with Al-Jazeera Net that the numbers are greater than what was announced, due to the failure of the Israeli Ministry of Health to conduct investigations and field surveys in East Jerusalem, and prevent the Palestinian Authority From any actual intervention in the city.

Deeb adds that the domestic quarantine is not available to a large percentage of Jerusalemites because of the population density, as it averages 7.3 people per one room of the residence, which raises the alarm, in light of the expectations of a large outbreak of Corona in the coming weeks.

Union of more than 80 institutions

In light of these circumstances and expectations, the Jerusalemites decided to reassure their fears themselves and manage the crisis away from lamentation and scarcity of possibilities, and since the 13th of last month, they launched the “Jerusalem cluster to confront Corona” with the participation of civil society institutions in Jerusalem, where today 81 81 Jerusalem institutions are united under their banner, bringing back memory to what Before the occupation of the city.

The coordinator of the “Jerusalem cluster to Face Corona” Ahmed Al-Budeiri told Al-Jazeera Net that the gathering has achieved sovereignty for the Jerusalemites with the services it provides and with the unity it has achieved, as it includes institutions that differed in their stripes and colors, and agreed on one goal that is to protect Jerusalem and enhance its resilience in the face of the Corona pandemic.

The Jerusalemite bloc consists of four arms, which are the arm of the directors of the participating institutions to carry out the supervision and guidance process, the volunteer arm that the gathering attracts and allows them to record their data through a special application, and the communications arm, which provided a hotline in the Arabic language to provide free psychological, health, educational and legal services, and consultations.

In addition to the staff of specialists in the above-mentioned fields who united their efforts within the forum, an information and media technology unit that devised applications for communication between parts of the community itself, and between the community, volunteers and citizens joined.

It also launched a Facebook page with an educational and informative mission, in which well-known Jerusalem faces appear in all fields through live broadcasts or attractive designs and phrases.

Just as the cluster worked to fight rumors by spreading awareness, it fought against their launchers using the family weapon, as it communicated with the common family of Mutlaq to deter it, thereby reducing the level of rumors.

Al-Badiri added that the gathering made an appeal to Jerusalem merchants not to monopolize and raise prices, which received a real response.

In a joint union between the assembly and the Jerusalem hospitals, medical tents were installed adjacent to Al Mutlaa Hospital and Mar Youssef to receive patients and sort them before entering the hospital, in addition to a tent under the French hospital to receive births at the height of the crisis. As a solution to the problem of quarantine and overcrowding, Al-Badiri said that the gathering in conjunction with hotel managers The participating institutions have equipped the Grand Park, Capitol and Christmas hotels in Jerusalem to receive quarantine cases and doctors from the West Bank working in Jerusalem.

The sterilization of vital institutions, the management of blood donation campaigns, and the provision and storage of medical equipment and tools for emergencies were also included in the gathering’s ongoing achievements up to the moment and expected for the zero hours.

On the zero hours, Marwan al-Ghoul, coordinator of the institutions in the “Jerusalem cluster to Face Corona”, says that the gathering is taking an inventory of ineffective medical teams, and calls on doctors, nurses and midwives in Jerusalem to register their data and put them on the reserve list to face the crisis.