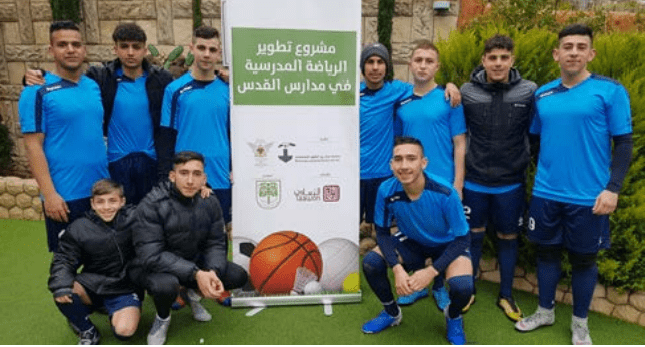 Burj Al-Laqlaq works with Al-Quds schools together to advance the reality of school sports, in cooperation between them, and with the funding of the Arab Fund for Economic and Social Development, and under the supervision of Tawon  “Welfare Association”.

The tournament was characterized by strong competition between teams, as everybody admired the spirit of cooperation and competition among the participants, and this indicates the size of consensus and joint work.

This Tournament culminated in the distinction and sophistication typical of the Jerusalem schools, where Al-Ommeh secondary school ranked first, while Al-Talaee Secondary School won the second position, and the third was in favor of Al-Injaz school.

The sports tournament supervisors and representatives of the participating schools extended their thanks and appreciation to Burj Al-Luqluq Community Center for the success of this sporting championship and for the great efforts to bring the tournament to safety with full success and success.

A praised  Montaser Edkedek, executive Director of Burj Alluqluq Social Center Society, has a positive competitive atmosphere between the participating sports teams, stressing that these teams have enjoyed that high sporting spirit, pointing to the importance of sports in all its forms and types in refining the personality of Jerusalem school students, which the association seeks with all its capabilities to encourage interest in the sports side in all schools Jerusalem, no less important than the interest in the educational curriculum.

Edkedek expressed his happiness with the creativity and competitiveness of the Jerusalem schools in the spirit of the team that the association always aspires to in all sports tournaments to come out with an advanced reality in school sports in Jerusalem schools, pointing out that the tournament showed several athletes with promising talents that must be nurtured and develop its talent