A closing ceremony distribution of prizes for The popular games competition 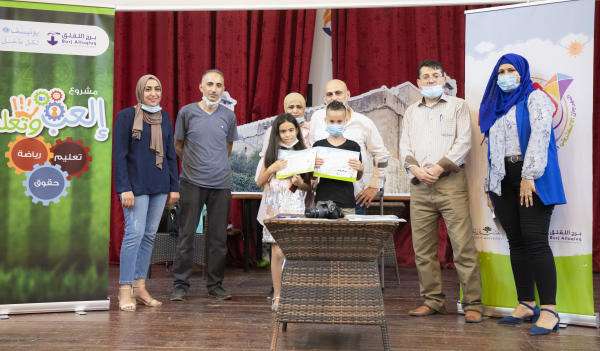 In cooperation with Birzeit University and the Popular Games Union

In view of the difficult health conditions that Palestinian cities, villages, and camps are going through in light of the outbreak of the Corona pandemic that has clouded the whole world and froze many life activities, including sports competitions, students of the Sports Administration Program (tenth batch) organized in the Department of Continuing Education of Birzeit University with the support of Burj Alluqluq Social Center Society the first festival of popular electronic games, which includes six popular games, which are tug-of-war, rope skipping, skipping, kite-flying, and movement game. by Submit a video containing the required game in a period ranging from half a minute to a minute and a half.

The door was opened to participate in this festival for all children in Palestine via the link attached to the festival page on Facebook, and the page address of the first electronic festival for popular games.

All the festival’s working committees were formed, which took it upon themselves to promote through the media, social media sites, and electronic pages to attract the largest number of participants in coordination with the Sports for All Federation and Birzeit University. Videos matching the festival’s conditions were shown before the jury and the results of the competition were announced and awards distributed.

The Children’s Happiness Theater of the Hebron Municipality hosted the ceremony for the first electronic popular games festival distribution, which was organized by students of the Sports Administration Program at Birzeit University, in cooperation with Burj Alluqluq Social Center Society in Jerusalem

The festival included an event organized by the students of the Sports Events Management course with the lecturer, Montasser Idkidak. The director of the tournament, Khaled Shaban, spoke at the beginning of the honor about the importance of this festival and the wide participation of children and their families and promised that the festival would be repeated more widely in the near future, and at the end of his speech, Shaaban thanked the Hebron municipality and management Child Happiness Center to host the honoring ceremony.

Alaa Gharib, a representative of Burj Alluqluq Social Center Society, praised the working committees that contributed to the success of the event, expressing the Foundation’s willingness to cooperate with all clubs and federations to establish such activities via remote communication.

Abdel-Fattah Dudin spoke on behalf of the children’s parents and considered these activities beneficial for children under home quarantine, as they have a great impact on developing their capabilities and reviving the heritage of the Palestinian people, and he thanked the organizers of this festival.

After that, the winners and their families were honored in the theater affiliated to the Childhood Happiness Center in the presence of the director of facilities in the Hebron municipality, Mahmoud Abu Subaih, and for the management program, students attended: Khaled Shaban, Khalil Rawashdeh, Naseem Kashour, and Nader Suleiman, and on behalf of the Burj Al-Luqluq Foundation: Alaa Ghorab, Sarah Dajani and Mahmoud Al-Salaymeh.