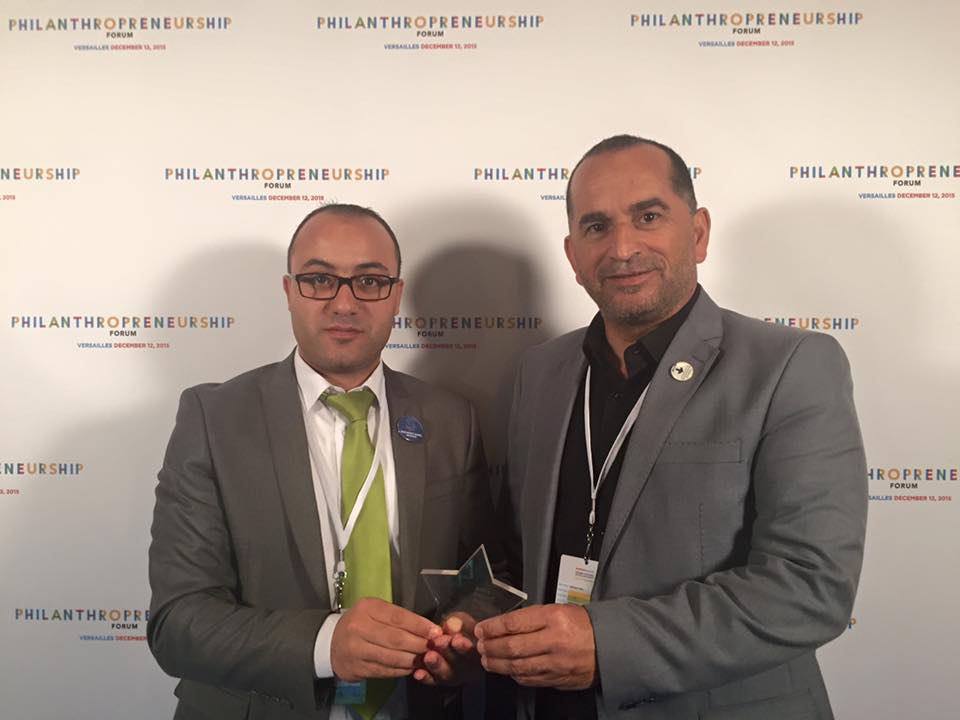 Burj Al-Luqluq Social Center Society received Stars Impact award, for the year of 2015, which is yearly offered by Stars Foundation “Al Dabbagh” to the charitable organizations around the world. Burj Al-Luqluq won this award due to its great effects and achievements in offering services, in addition to educational, cultural, psychosocial, health, sports and recreational opportunities for children.

On the 12th December 2015, in the Palace of Versailles for conventions in Paris, Burj Al-Luluq Head of Board Members, Nasser Gaith, and its Executive Manager, Muntaser Edkaidek, received the award on the presentation stage for Philanthropreneurship Forum entitled “The New Prospects of Charity”

As a part of the award, Burj Al-Luqluq will receive 50 thousand US Dollars of flexible funds, in addition to a special support for capacity building in order to develop the plan of the organization, its work mechanism and its staff.

Moreover, Stars Foundation has given this award to 24 organization from different countries including Palestine, Colombia, Iraq and others, as they work with disadvantaged children.

Burj Al-Luqluq Social Center Society was established in 1991. The center, 9 acres in space, is considered an open space for the crowded neighborhood, as it provides them, especially youths, with education, sports, culture and arts.

The center provides little children with safe and healthy area to play. In addition, it arranges special workshops for mothers which focuses on gaining skills form which the youth can benefit on the long term.

Sports in Burj Al-Luqluq Center is considered a main factor of children’s physical and psychological health. Around 400 Jerusalemite male children participate daily in Football, Taekwondo, Parkour and Handball trainings. On the other hand, around 70 girls participate in basketball and taekwondo trainings. It is worth mentioning that Burj Al-Luqluq members reached 1200 in the year of 2014, among which there were 500 children.

Muna Wahbeh, Stars Foundation Executive Manager said, “Once again the Starts Impact Award winners this year have shown their abilities to perform an excellent work that meets up with the needs of children, as well as showing the strength points of their managerial and organizational actions. Now, the flexible fund will allow those organizations, managed locally, to determine how it will use this fund to nhance the quality work it does. This year, we are happy to give this award to a wide range of countries that reached 12 countries”

On his behalf, Burj Al-Luqluq Head of Board Members, Naser Gaith, had dedicated the award to the administrative staff, all other staff and volunteers, in addition to the Board Members, who work together and do their best to maintain the Arabic and Palestinian Identity of Burj Al-Luqluq.