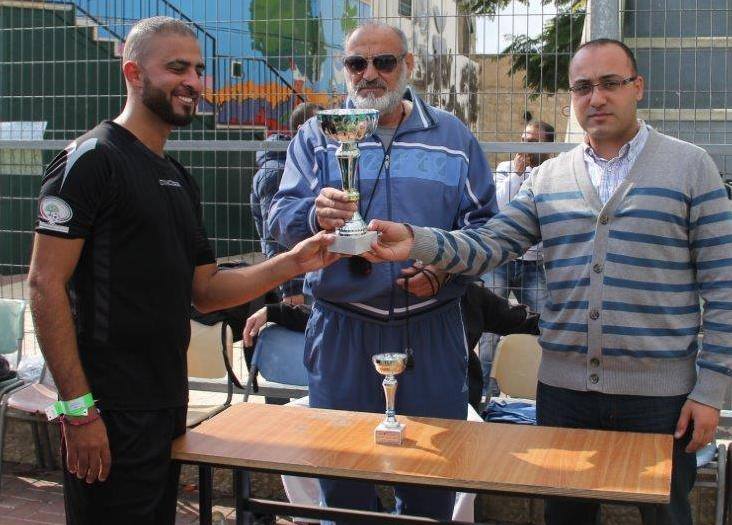 Burj Al Luqluq social center Society has organized a championship – we’re not afraid – for Al-Quds University students from physical education faculty. Four teams have participated; each team was named in one of the 7 main gates of Jerusalem in which restricted Israelian procedures were practiced on enter-exit point for Palestinians. The chosen names were: Bab Ala’mod , Bab Alsahera , Bab ALasbat and Bab ALkhaleel .

The competition started at 9 am on Burj Alluqluq pitch under the supervision of the instructor in physical education material in Alquds University Hisham Idrees , under the presence of the association manager Muntaser Idkaidek and the coach Ragheb Abu Sneineh. The nature of the playing was 5 players in each team on the pitch with the availability to gain the winning from points by corner kicks.

The coordinator of this competition Hisham Idrees was the referee of the final match, he confirmed that these types of competitions are to make the players used to play on small pitches which is harder to score easy goals. moreover , he indicates that all the players were playing and acting seriously to make this competition goes right , trained on the orientation and not with one aim only which is winning .

The association manager Muntaser Idkaidek thanked Dr Hisham Idrees and all the participants of this competition. Furthermore, he confirmed that this association will remain the light of the old city. Finally, the winner team was given a cup and medals, all competitors were happy, full of fairness and respect.

← Within Jerusalem Ambassadors project Burj Al-Luqluq Center organizes the first phase of the program: Al-Murshid Al-Safir for Jerusalem school students. Within the Shababek Ya Quds Project under the supervision of the Welfare Association The Young Guide program Tours →