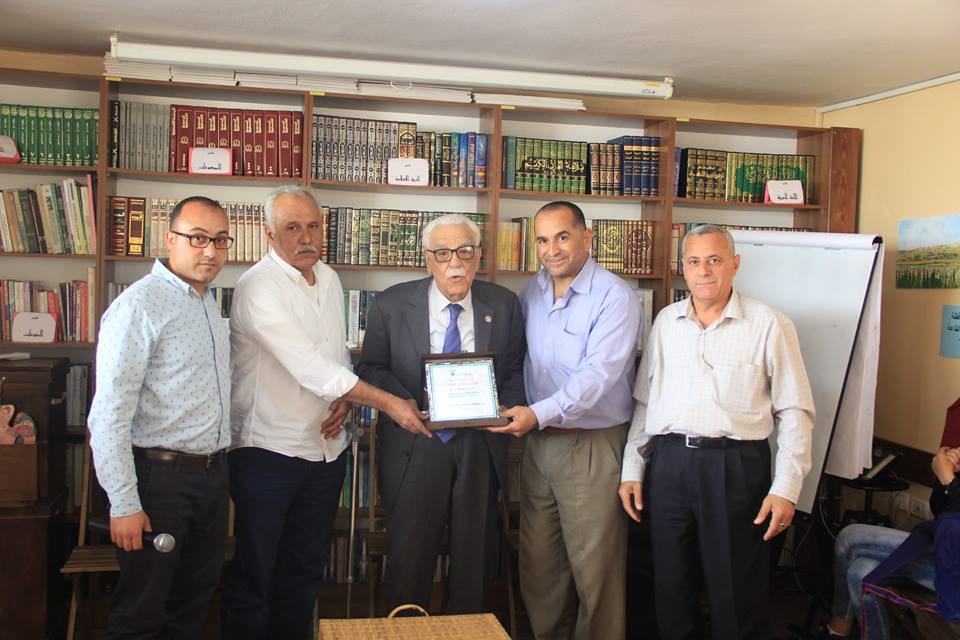 The ceremony started in cutting the ribbon of announcing and opening the photography exhibition by the Doctor Subhi Ghosheh. And then, the participated students presented a brief explanation on their own captured pictures to the crowd and Al-Kharouf presented other brief description on the entire course and on the training sessions given for the participated students.

After that, Muntaser Idkaidek welcomed the crowd and thanked the Dr Subhi Ghosheh for his invitation acceptation confirming that his presence to Burj Al-Luqluq Social Center is a Pride for its managers, youth and for the Old City, especially after considering Ghosheh as one of the primary Militants who carried the message of volunteering, working and fighting for Jerusalem and maintaining Jerusalemite institutions.

Burj Al-Luqluq head manager Ghaith honoured Dr Ghosheh a shield confirming his loyal role in serving Jerusalem and its people and associations within a half year period of volunteering activities. Furthermore, Ghaith added that Dr Ghosheh militant history covered many Arab countries to support Jerusalem and Jerusalemite Militants and Dr Ghosheh, is the founder of Al-Makased Charity , Jerusalem Day Association and many association in Palestine, Kuwait and Jordan.

In addition, Sameer Al-Turman honoured Dr Ghosheh a Shield presented by the Consultancy Committee for Combating Drugs in Jerusalem. Sameer expressed his pleasure in meeting Dr Ghosheh after the long absence to Jerusalem and to the Old City nehiborhoods.

Finally, Dr Ghosheh presented a speech to the Jerusalemite participated youth, in which he motivated them to work for Jerusalem, encouraged them to move forward in education and volunteering in many social aspects confirming that Jerusalem needs them because they are the flame which will maintain Jerusalem and its holy sites. Moreover, he confirms that the world is informed daily about them, because they are the compass to the whole world and they should be proud of their existence in Jerusalem and living in it.