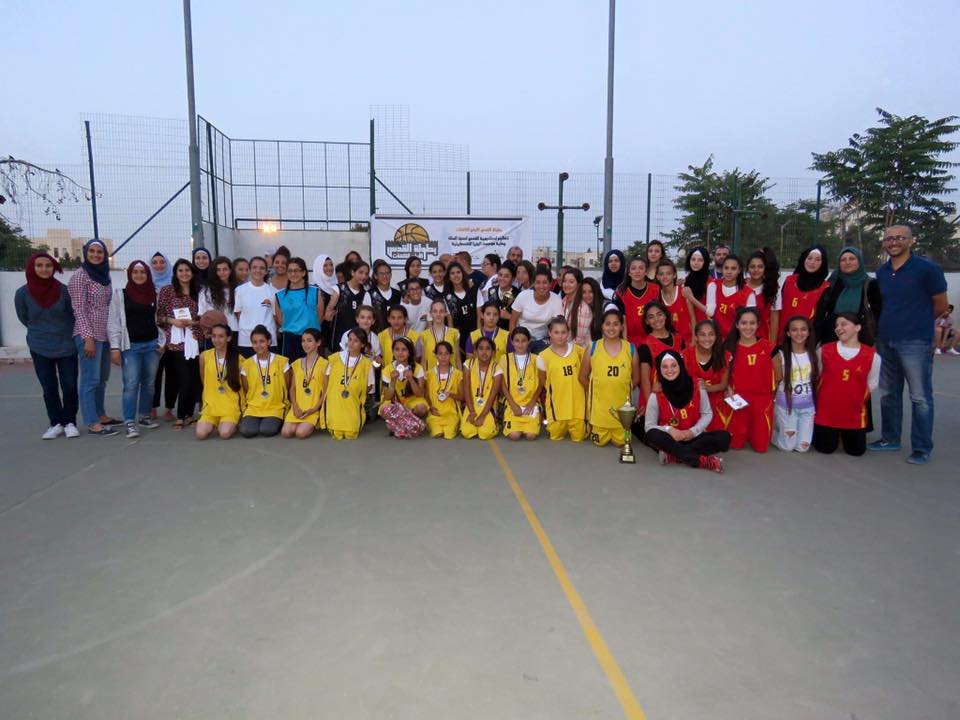 Final matches of the tournament were set off on Y.M.C.A pitches for the female participated youth, in which Jerusalem’s Academy for Basketball has won the cup by winning the final match against Burj Al-Luqluq team.

The tournament program was conducted under the system of knockouts of the defeated teams. Moreover, the matches were as follows; the first match was between De la salle and Burj Al-luqluq which ended for Burj in a score of 20-17 while the second was between Jerusalem’s academy team and Terra sancta and ended for Jerusalem’s academy in a score of 30-11. Both teams qualified to final match according to the previous results.

The final match was characterized by high tempo and strong competition between opponents. However, the coach of Jerusalem’s academy ‘Tawfiq Rafeidi’ changed the game by his tactics and substitution decisions which was reflected positively on Jerusalem’s academy team performance and leaded them to won the match in a score of 26-11 and won the tournament.

On the podium, Muntaser Idkaidek thanked Palvision and Jerusalem’s Academy for the great efforts and roles in implementing the tournament. He emphasized also on the importance of activating female sports trends in Jerusalem. Furthermore, the coach ‘Jamal Adileh’ expressed his pleasure and appreciation on the great high performance of the participants and emphasized on the need of making more persistent tournaments due to their role in reinforcing Jerusalemite youth roles in multiple life aspects.

Finally, The cup for the champions was given to the captain of Jerusalem’s Academy team ‘ Samar Wazouz’, second’s place cup was given to the captain of Burj Al-Luqluq team ‘ Iman Badran’,  the third’s place cup was given for Terra Sancta team, the fourth’s shield was given for Da Le Salle team and  rewards were given for  Ahli Al-Quds team as the perfect team in the tournament and for Al-Thouri team coached by Abeer Ayoubi as the youngest participated team in the tournament.

← The project ‘ Drugs in the Eye of Jerusalemite Mothers, Wives and Sisters is Persistent Burj Al-Luqluq Launches Five Summer Camps in Collaboration with Jerusalemite Clubs & Communities Sponsored by the General British Council in Jerusalem →